Thanks to some exciting and innovative work by my colleague Rollo Kohime (aka as Mike Baker of NMIT’s Visual Arts team), Koru has sprouted a new and rather interesting build over the last few months. 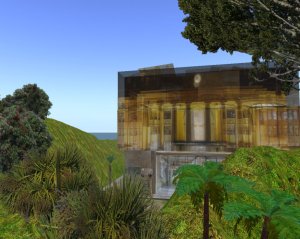 Mike is currently studying for his Masters in Art and Design, majoring in Dance and Video through the Auckland University of Technology. His project, “In the Company of Strangers” comments on how strangers negotiate the parameters of meetings, exchanges and conversations in urban spaces. The build, which utilises Mike’s own photographs, blog entries, comments, soundscapes and which will include his video, explores this in one urban space, Wellington Railway Station. The effect is mesmerising and highly immersive. Take a trip to Koru to contemplate the existence or not of some of the boundaries between the virtual and the real, and those between strangers. If Rollo is there, he will happily chat to you about his work in progress and he plans to have a more public display of himself working in Second Life during the Nelson Arts Festival.

Watch this space for more details on this!

or you can visit Mike’s blog for more information or to leave your comments. Below is a SLURL to Mike’s build on Koru: And if you come visiting feel free to look around the rest of the island too, listen to the tuis or the morepork and if you are really lucky you may catch the whale song in the bay. http://slurl.com/secondlife/Koru/86/77/22

The Second Life demons were playing with us on Friday evening but still an eclectic group met around a campfire on Koru and told some of our Second Life life stories. Unable to successfully record the audio stream, the event was largely ephemeral but those of us who were there had a wonderful time. Iphigenia illustrated hers with photos while I was able to pass around Arwenna’s story on a notecard while other, friends both old and new, delighted us with their thoughts. For many it was the first time we had shared stories in this kind of forum, in either life, and the sense of connection and community was strong. Even better was to discover later the truly global nature of the experience that we had helped to create.

It may have been a small beginning but roll on next year! And in the meantime keep the stories flowing. 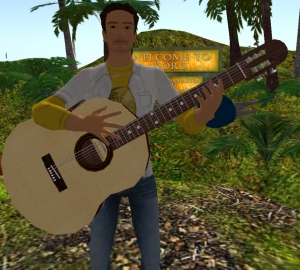 What a party! It may not have lasted that long but it was a huge buzz. The first time we managed to stream our own live music from Nelson, New Zealand into the Kauri grove on Koru. (OK nothing new for SL but new for us!).  The occasion was a surprise Kiwi Educators party for Isa Goodman’s 2nd rezday (He’s now one of the terrible twos!) and we used it as a reason to finally make the music happen! What a great start to NZ Music month.

Toddles Lightworker kindly lent us the use of his streaming account, Thelonius Ra was the engineer and Mandosam Carter played guitar, mandolin and sang and oh we all danced! A very big thank you to everyone.

So will we be doing it again? Oh yes! We have PLANS. We hope to have Mandosam again, other musicians too, and eventually we hope to offer SL as a live performance venue for students on the RL Diploma of Contemporary Music Perfomance here at NMIT. And wouldn’t it be great to be able to offer the winners of the Smokefree RockQuest a gig in SL as one of their prizes? How about it Pete?!

So once again a special thanks to all those who put up with my nagging and made it all happen – it is very much appreciated – and tired though he was I hope Isa liked his little surprise. We wouldn’t be here today without you Isa – so a very BIG thank you to you too!

Well what an exciting couple of days! I heard about 7.45am yesterday that our consortium’s application for funding from the NZ government’s Encouraging and Supporting Innovation fund had been successful! With around NZ$500,000, it will allow us to devote some real resource to exploring and developing education and education resources in Second Life.  The consortium is made up of Nelson Marlborough Institute of Technology, Otago Polytechnic, The Open Polytechnic of New Zealand and Wellington Institute of Technology and IBM are giving us their support too.

Our current plans include a research report looking at the pedagogy of immersive environments, the identification and building of two learning activities designed to take best advantage of SL, the introduction of educators to Second Life and assistance for them to effectively teach there, the piloting and evaluation of the learning activities with students by these educators. Ambitious? You bet! It’s going to be a busy 18 months I think but hopefully we should learn a huge amount and be able to pass on a number of tips on what to do (and what not to do!).

Part of the project too is to extend and maintain a community of practice for NZ educators and both Koru and the Kiwi Educators group will be big players in that. Watch out for news of events happening soon.

Just had a neat Kiwi Eds session on Koru tonight. Iphi came to talk to us about International Day for Sharing Life Stories and how we might play a role in Second Life. Those of us there thought it would be a great idea to use Koru for a two hour (perhaps) session. The day is on May 16th and we will use this blog posting to gather some of the ideas on what we might do – so if you have any ideas – please comment!

This is from the the blogsite that Iphi told us about:

“The Museum of the Person International Network (Brazil, Portugal, USA and Canada) and the Center for Digital Storytelling (USA) have announced Listen! – International Day for Sharing Life Stories, an international celebration of life stories to take place on May 16th 2008. They are launching the project website, www.ausculti.org to assist with information sharing and coordination of the campaign. The goal of the campaign is to gain broad recognition of May 16 as an annual day for sharing, listening to, and gathering the stories of people’s lives.”

We wondered whether it would be fun to have part (or all ) of the session on Second Life life stories – what do you think? And would you be prepared to share a story of your life (second or first?) let me know so that we can think about some planning!

I have just returned from the second midwives meeting in SL. It was an interesting challenge as Second Life was having a bit of a bad hair day and being just a little temperamental! Poor Dacary kept crashing and none of us, except Petal, had much luck with getting (or keeping) voice working. We reverted to text alone which can be difficult for some (but at least I could eat my hot cross bun without anyone knowing!)

We were joined by two midwives from North America today – Sudbury Runningbear and Lisachris Latte and also Moonshadow Questi from Australia. A different set of people today probably because of time differences. All the resources for the midwives group and meetings are to be found either on Carolyns blog here or on the wikieducator site which she had set up here.

We ended up in the cave in Arwenna’s Secret Garden – which was a neat thing for people fairly new to SL to see – and I just had to show off and turn into a mermaid for a while!

I also promised that I would seek out the SL Competencies that had been suggested by Chris Eggplant over at Education UK. I will post about that shortly!

A number of people who attended the meeting have blogged about the experience and have photos and even a short screencast from Petal (aka Sarah Stewart).  It is good to see that it is inspiring others to think about how they could potentially use Second Life in their own areas too – and Koru Bracken (aka Merrolee Perriman) has suggested that perhaps people in her own area of  Occupational Therapy might think about its potential for them too.

It was a pleasure to host the inaugural (I think!) meeting of the Midwives in SL group on Koru yesterday. Over the last few months I have had the fun of helping Carolyn McIntosh (aka Dacary Dumpling) becoming a little more familiar with Second Life and it was great to see her many hours of SL learning coming together in such a positive way.

Carolyn is a midwife who teaches at Otago Polytechnic and keeps an interesting blog here – she identified Second Life as a potentially exciting way of networking with other midwives and it was great to see midwives from UK, US, NZ and Australia in attendance.

I agree with Carolyn about the power of SL as a networking tool – for me it has been as much about that as it has about actually teaching here – although hopefully that will change soon!

During the last few months of 2007 I spent too much time beating myself up about the fact that I really should be blogging about Second Life in particular our experiences with the NMIT Island, Koru. Somehow real life constantly got in the way so with a new year comes the mandatory new year resolution and another new blog is born.

This one is specifically dedicated to Arwenna Stardust’s SL existence and is intended to both keep others abreast of the news of Koru, the Kiwi Educators group and NZ SL education initiatives and also to provide a forum for exchanging thoughts and facilitating discussion on Second Life in general and, more specifically, on SL as an educational tool or medium.

Koru has been fairly quiet over the summer holidays as you might imagine but Isa Goodman has taken the opportunity to do some further landscaping work and the island is beginning to take shape and look wonderful. A visitor today commented ” This is BEAUTIFUL”.

Our regular renters have been joined by two new arrivals, UCOL Library services and Massey University at Albany. More details of their work in a later post.

Toddles Lightworker (Todd Cochrane) of Weltec organised what we believe is the first NZ live performance in Second Life last week and several Kiwi Ed members came along to watch and listen. We hope to make this a regular feature this year so watch out for invitations!